When I work with women feeling nervous before a major event, such as their first interview in ten years, I give them an instant self-assurance tip that is often met with a look of incredulity. I recommend that they find a quiet place just before the event and make a 'Power Pose' - taking a Wonder Woman stance or adopting the 'starfish' pose which Mick Jagger is modelling so effectively in the photo above. This sounds like the type of 'too-good-to-be-true' advice that could give psychologists a bad name, but in fact it is based on a convincing body of research evidence.

Amy Cuddy, a Harvard social psychologist, explained in a wonderful 2012 TED talk* how "making yourself big" for just two minutes changes the brain in ways that reduce anxiety, build courage and inspire self-expression and leadership. Changing our body language effectively changes the way we think and feel about ourselves. If you're interested in the science, lab studies found that a two minute power pose increased the levels of the power chemical testosterone by around 20% and lowered the stress hormone cortisol by about 20%. What's more, this has a knock-on effect on how we behave, how we are seen by others and the likelihood of positive outcomes. In another study Professor Cuddy reported that people who adopted high-power poses before interviews were overwhelmingly more likely to be offered the job by impartial interviewers.

Recently I followed my own advice. My nerves kicked in before my first time on national radio, appearing on BBC Radio 4's Woman's Hour** to discuss returnships with Jenni Murray, Julie Thornton (Head of HR at Thames Tideway Tunnel) and Carmen Nuzzo, who joined Morgan Stanley in a permanent role following their 2014 Return to Work programme. So if you had walked into the ladies' toilets in a cafe down the road from Broadcasting House at 9.18am that day, you might have been surprised to see a blonde middle-aged woman in a green jacket striking a full-on hands-on-hips legs-wide Wonder Woman pose ... and now I can personally vouch for the benefits! 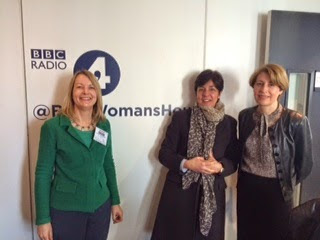 To be emailed each new post, enter your email address here and follow the steps to register